How to implement a Certified Quality Program in under a year

By Cailin Morphy December 2, 2020 No Comments 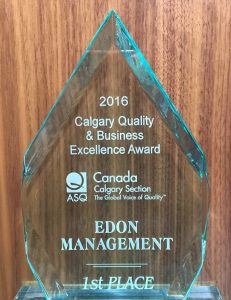 It was January 2016 when Edon first embarked on a tremendous journey. The goal was simple: implement a quality program certified to the ISO 9001:2015 standard in less than a year. Easy? Perhaps not.

Fast forward to four years later and we’ve successfully built a quality-focused culture within the organization, with an award to boot. The American Society for Quality, Calgary Chapter, awarded Edon the Calgary Quality and Business Excellence Award for its successful program implementation in such a short time frame. How did we do it? These six factors were key to pushing forwards towards the goal.

Results are driven by clear objectives, timelines, and responsibilities. Edon made it a company goal to achieve this certification, which aligned all team members on a common path. It didn’t matter where you worked or what your job description was, each member contributed in a defined manner to the overall goal.

One of the biggest complaints we received early on was that the people creating policies and procedures didn’t understand how it impacted operations. Asking for feedback and testing procedures first before rolling them out is key. Edon developed a committee with representatives from across Alberta to test initiatives in their regions and provide feedback on an ongoing basis.

Change does not come easily for most people. Certifying Edon’s quality program created additional workload and frustration among many in the organization. To combat this, Edon ensured its senior management team was on board from the beginning, which trickled down into middle management and employees. Benefits of the new program and why the change was important helped employees understand its necessity. Continual communication on the program’s status and admitting areas that needed improvement were key to keeping employees engaged. At the end of the day, those who were strongly against the change had to question whether they were with us or not.

The last piece of the puzzle, but also the most important, is a strong training program. As a result of the fast pace set from the beginning, processes were rolled out quickly and in large quantities. At times it was difficult to keep straight. Edon developed a series of modules and short training videos to review each process and train new employees. Additionally, in-person training was provided to each region across Alberta, allowing employees to ask questions and air any grievances. Since then, continual training has become an important part of the program’s success.